Archangel does not appear in this episode. Dominic spends most of the time on the ground or flying his Jetranger. Hawke and Caitlin have secondary roles with Airwolf only showing up towards the end with Hawke flying and Caitlin as WSO.

Dominic visits his Korean buddy "Big Cece" Barnes and unwittingly steps in between a bitter feud between him and his son "Litte Cece". Things get worse when they find out that "Little Cece" is involved with a deadly drug-smuggling ring. [1]

The scene opens with a drug bust. A plane delivering drugs is surrounded and captured on landing. In the shadows, two gangsters, Carlos and Alvin are waiting for the delivery. They run off.

Airwolf is undergoing some repairs in the hands of their firend Frank. It will take another two days, so Dominic takes Hawke and Caitlin to Texas to meet his old friend "Big Cece" Cecil Carnes who owns an oil refinery.

At the refinery, Dominic is greeted by Big Cece's son, Little Cece and Noble Flowers, the foreman. Little Cece takes them to see his father who is at home resting. He has had an accident at the worksite and is on crutches.

Over dinner, the tension between Big Cece and Little Cece is obvious. When Little Cece enjoys Dominic's food, Big Cece takes it as a slight on his own cooking. Hawke and Caitlin get up to go and Little Cece offer to take them to town.

Left to themselves, Big Cece tells Dominic that everything had fallen apart since the death of his wife and Little Cece's mother three years ago. First they blamed each other for her death. Second, Little Cece had recently been expelled from A&M University for selling marijuana. It was suspected that he was working for someone but he had refused to reveal his contacts. Big Cece tells him he can't get through and asks Dominic to talk to his son.

The next day, Dominic gives Little Cece a bit of a flying lesson and then send him to work at the refinery, Noble Flowers approaches Dominic. They are short of a pilot ever since Big Cece was injured. Could Dominic help deliver instruments which needed to go to the shop and some samples which to be tested? Dominic is happy to help so Noble Flowers sends Little Cece with a package. Little Cece refuses but Noble Flowers warns him there could be unfortunate consequences for himself and his father if he refuses.

During the flight, a Piper aircraft always collides with the Jetranger. During the evasive maneuver, Little Cece drops the package and it becomes jammed in the tail rotor pedals. The package is torn and white powder spills out. Dominic gets angry. What's going on? But Little Cece refuses to rat on the gang. Dominic declares he will get to the bottom of it, with or without his help.

Obviously Little Cece has decided to cooperate. He directs Dominic to the rendezvous with Carlos and Alvin. There Alvin doesn't recognise Dominic. But Dominic turns the tables. He has the package. They want it but he doesn't give it to strangers. He demands that Alvin show some ID. Alvin is forced to obliged. Dominic then slams the Jetranger door and lifts off.

Dominic knows Alvin and Carlos will be in pursuit so he heads for the first obvious place, the Carnes residence, to pick up Big Cece. They get him and lift off just in time as Carlos and Alvin burst through the gates.

Over at a hotel, the father and son still cannot see eye to eye. Big Cece storms out of the room in anger. But he leaves behind a pile of letters. He had been writing them regularly to his late wife. In a recent letter, he tells her that he is proud of his son Little Cece and that he is really the best son in the world. Dominic finds this and forces Little Cece to read it. Reassured, Little Cece tells Dominic that Noble Flowers was expecting a big shipment the next day. But he is not sure where. Dominic calls Hawke--he needs Airwolf.

Big Cece has overheard and he wants to go along. He may have a broken leg but no one else is man enough to go. Little Cece leaves the room. Dominic tries to talk sense to Big Cece. To Big Cece, his son is just like the rest of them, but Dominic says if they can intercept the shipment before it is distributed, it might be possible to work out a separate deal with the law for Little Cece. They call for Little Cece but where is he? No time to find him--Alvin and Carlos burst through the door and demand their package. Big Cece and Dominic reprise a coordinated bar fight trick they did in Korea and take their enemies by surprise. Alvin and Carlos are knocked out.

Over at the refinery, Noble Flowers and a man named Moose get ready to escape. Alvin and Carlos had earlier warned them that they might have to meet up with the Mule and handle the shipment themselves. To cover their escape, they plant a timer bomb to set fire to the refinery. Little Cece has turned up and wants them to stop and to come with him but they bundled him into a cabin and lock him up.

Dominic and Big Cece arrive at the refinery to find it on fire and the men desperately trying to fight it. Big Cece takes charge of the operations and sends Dominic to look for Little Cece. Dominic is attracted by Little Cece's kicking sounds and opens the cabin and unties him. Little Cece tells Dominic that Noble Flowers had planted the bomb and had taken off in a four wheel drive.

The fire at the refinery looks like it is going out of control but just then Airwolf turns up. Hawke and Caitlin fire a sequence of rockets to cut a trench. This traps the oil and stops the spread of the flames. The fire has been contained and the men can resume putting it out.

Hawke then heads to cut off Noble Flowers. They find an abandoned pick up. Obviously there has been a switch. Further on, they find a rocket armed Hughes 500 heading south. It's Noble Flowers and Moose. Hawke calls to them to land and surrender but they refuse and instruct the pilot to take Airwolf down. The Hughes fires a few rockets and misses. Hawke loads a Hellfire and shoots the Hughes out of the sky.

Back at the Carnes residence, Big Cece has been receiving letters of congratulations from everybody including the lieutenant-governor. There's also news for Little Cece--the authorities have agreed for him to serve probation in California. He could go to college and may be even get a part time job at Santini Air. However Big Cece disagrees. If Little Cece is going to learn flying, he is the best teacher for him. 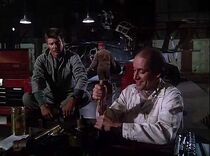 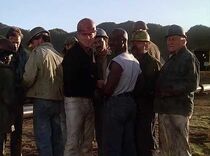 A shot of refinery oil workers. Noble Flowers (Lance Legault) is in the red helmet. Moose is in white. 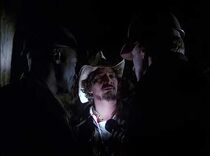 Nicely framed shot of Luis Contreras as the Mule flanked by Noble Flowers and Moose. 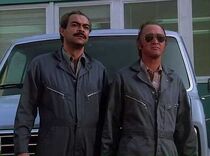